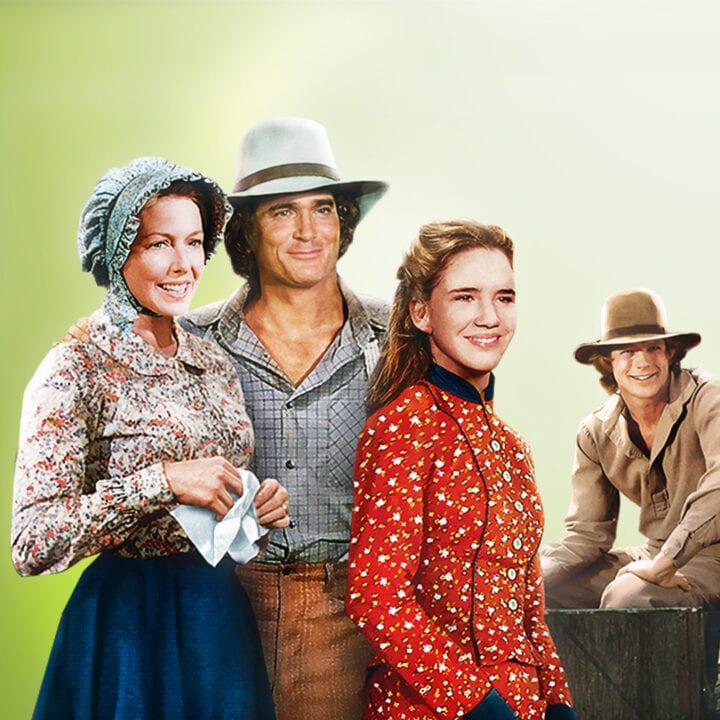 Little House on the Prairie, Episode 115

Convinced that she is responsible for her brother’s death, Laura runs to the mountains in the middle of the night. Atop the mountain with her is Jonathan, a kindly old man who helps her reaffirm her relationship with God as she comes to terms with her guilt. Meanwhile, Charles and Mr. Edwards search frantically for her, but with so many miles separating them, it will take a miracle to reunite them.

More from Little House on the Prairie Season 1

When the Big Woods of Wisconsin becomes a difficult spot for hunting, Charles Ingalls reluctantly decides to move his family to Kansas's more open and fertile land. Leaving their beloved relatives proves to be devastating, but the resiliency of the Ingalls spirit reigns supreme as they head out in their covered wagon. Along the way, Charles falls in love with the lush openness of the Indian Territory, and he quickly settles there with his wife and three young daughters. A kindly man named Isaiah Edwards helps Charles build a house, and Laura develops an instant fondness for him, but Caroline takes longer to accept his gruff nature. Joyous times are mixed with sad ones as the family deals with wolves, Christmas celebrations, Indian encounters, new births, fires, and above all, the unnerving realization that maintaining a stable, permanent homestead is not as easy as it looks, especially when they have decided to place their footprints on Native American soil.

A Harvest of Friends

Charles Ingalls has decided to settle his family on the banks of Plum Creek in Walnut Grove, Minnesota. He builds a home for them with his own hands and heads into town immediately to look for work. It is hard enough meeting his financial responsibilities and finding enough time to spend with his family, but the greatest challenge arrives when an unfortunate accident places the Ingallses in jeapordy.

Laura and Mary are nervous about their first day of school in Walnut Grove, but they are quickly put at ease by the genuine kindness of their new teacher and the majority of their classmates. As the girls focus on their studies, Laura clashes with a mean-spirited girl named Nellie Oleson. Later, when their teacher invites the children's families to a special presentation in the classroom, Laura must come up with her own plan of attack when she realizes that she is not prepared.

Delighted with his beautiful new wheat crop, Charles is in a position to buy new dresses for his daughters, a warm coat for Caroline, and maybe even some new boots for himself--not to mention an ideal team of horses that the family's newfound financial position can now afford. It all sounds like a dream come true, but the Ingalls receive a shocking wakeup call when a harsh hailstorm destroys the entire crop. Determined to make it through this difficult time, Charles heads off to find some work, and along the way he encounters two fellow husbands and fathers in the same situation as he. While Caroline, the girls, and the other women of Walnut Grove do some important work of their own in Walnut Grove, Charles and his new friends accept jobs that offer good pay and dangerous consequences.

While Charles is traveling in Mankato, he meets up with a drunken Mr. Edwards and encourages his longtime friend to return with him to Walnut Grove. Isaiah adjusts quickly with the Ingalls, bunks in the barn, and even lands a job at the mill. Caroline has the "opposites attract" theory in mind when she sets him up with the shy and reserved Grace Snider, and sure enough, the two of them quickly develop a relationship. The whirlwind romance is soon threatened, however, when Grace discovers a painful truth about her new love interest.

The Love of Johnny Johnson

When a new boy named Johnny Johnson arrives at school for the first time, Laura is immediately smitten. Johnny is a friendly boy--if not a bit scatterbrained--and although he is oblivious to Laura's crush on him, he certainly makes it clear that he is interested in Mary. Even though Mary does not share the same feelings, the "love triangle" is enough to cause tension between the sisters.

If I Should Wake Before I Die

Amy Hearn is an elderly Walnut Grove resident whose children don't seem to be trying hard enough to visit her. In an act of desperation, Amy decides that staging her own funeral is the only way to see them again, but it's a scam that she can't pull off by herself.

Laura connects with a sweet, shy classmate named Olga Nordstrom, who happens to have been born with a short leg. Charles has an idea that can change Olga's entire life, but the challenge will be convincing the child's stubborn widowed father.

Charles is preparing for a business trip to Mankato, and he wants to turn it into a romantic getaway for him and Caroline. They leave the girls in Mr. Edwards' care, but things don't go quite as planned for anyone involved.

When Miss Beadle is injured in an accident, Caroline is asked to fill in temporarily at the school. While teaching, Caroline sympathizes with Abel McCay - an older student who is quiet, withdrawn, and reluctant to learn.

Feeling guilty for accidentally breaking Laura's beloved china doll, Mary brings home a baby raccoon to smooth things over with her sister. Charles is hesitant to allow Laura to keep the animal, but he decides that it would be all right to make a temporary adoption--a choice that he lives to regret.

The Voice of Tinker Jones

When Reverend Alden suggests taking up a collection for a new church bell, tempers flare over how the bell should be financed. Proud Mrs. Oleson wants to donate the money for a large bell and include a plaque with her name on it. Others protest the idea, and both sides threaten to leave the church. As battle lines are drawn, a mute Tinker has another idea to bring the town back together.

While studying for an optional history examination in the barn one night, Mary accidentally knocks over a reading lamp. After narrowly putting out the fire, a furious Caroline yells at her daughter and forbids her from taking the special test. Later, Mary takes a job at the mercantile to pay for some items damaged in the fire, then makes a decision that could further aggravate her relationship with her mother.

The Lord is My Shepherd – Part 1

The Ingalls family appears to be officially complete when Caroline gives birth to a beautiful little boy, but trouble strikes when Charles Jr. falls gravely ill. Jealous of the baby's place in her father's heart, Laura refuses to pray for her brother, which leaves her with a heavy burden to bear when fate takes an ugly turn.

Convinced that she is responsible for her brother's death, Laura runs to the mountains in the middle of the night. Atop the mountain with her is Jonathan, a kindly old man who helps her reaffirm her relationship with God as she comes to terms with her guilt. Meanwhile, Charles and Mr. Edwards search frantically for her, but with so many miles separating them, it will take a miracle to reunite them.

With Christmas approaching and the Ingalls facing a very short supply of shopping money, everyone works hard to make the holidays special. While Mary begins working overtime for the town seamstress, Caroline longs silently for an expensive new stove from the mercantile. Charles raises extra money of his own by reconstructing some wagon wheels, but perhaps the biggest shock of the season comes from little Laura, whose personal sacrifice will reaffirm everyone's understanding of genuine family love.

After having a huge argument with his wife in the mercantile, Nels leaves the house and moves into a hotel room down the street. Everyone is convinced that they were reconcile quickly, but trouble flares deeper when Harriet talks about taking the children and leaving Walnut Grove. When the tireless efforts of the community fall flat, Charles and Caroline resort to the classic reverse psychology to squelch this marital conflict.

Harriet Oleson's young niece comes to town for a visit and is immediately attracted to Doc Baker. A whirlwind romance follows, despite their significant age difference, and although their friends and family are concerned, they go ahead with an engagement--until an unexpected event leaves them both with a critical choice to make.

Several people in Walnut Grove get very sick. A quarantine is set up in the church while the source of the illness is being sought.

The Ingalls receive a midnight visit from Will O'Hara, a traveling circusman who, with his irresistably charming demeanor, persuades Charles to let him set up in front of their home. Whether he's pulling eggs out of people's ears or proudly toting around his congrilla, O'Hara's tricks are all in good fun--until he introduces a slew of "magic powders" that supposedly heal a variety of illnesses. When O'Hara's little theory nearly costs an appendicitis-stricken Mrs. Oleson her life, Charles asks him to leave town--only to track him down again in the wake of a family crisis.

When a young boy named Graham Stewart arrives at school every day with various bruises, nobody has the courage to do anything until his alcoholic father almost kills him in a drunken rage. The Walnut Grove community is reluctant to help, but Caroline encourages them to do it for the child's sake. While Graham boards with Caroline and the girls, Charles moves in with John to help him become sober. Information is gathered from both sides about John's genuine (and somewhat unconscious) feelings for his son.

A college-educated farmer named Joe Coulter moves to Walnut Grove with his wife, who is expecting a child. Joe tells the Walnut Grove-area farmers of a new hybrid of corn that would produce good crops, to which the farmers are very enthused, and he even agrees to collect everyone's money and take the trip out to Mankato to purchase the corn for everyone. After a fateful accident on the way home, Joe is unable to return on time, and while several of the men in town turn against both Joe and his emotionally strained wife, each member of the Ingalls family does their part to defend the Coulters' honor in the face of such confusion.

Charles decides to bring Caroline and the children along for a springtime trip to Mankato, but on the way back, they must seek shelter from a vicious blizzard. They locate a deserted cabin that allows them to build a fire and shack up for the time being, but problems ensue when Charles must go hunting to feed his family. The unforgiving weather threatens Charles' life, but just as he is near death, he finds help from a very unlikely source. Back at the cabin, Caroline and the girls receive a surprise visit from an American marshall, whose deep-rooted hatred has him on a vengeful mission.

To See the World

Johnny Johnson leaves to "see the world" and Mr. Edwards goes along with him to keep him out of trouble. Johnny meets up with a girl who is able to trick him out of a lot of money. Mr. Edwards talks to this girl to try to have her convince Johnny to go back home.

With a Founder's Day event approaching for Walnut Grove, everyone prepares for a celebration complete with games and heated competition. Everyone in the Ingalls family ends up participating, most notably Charles, who finds an unlikely nemesis in the log-splitting competition.